With a dedicated fan base, Montclair, NJ’s Pinegrove have gained a considerable amount of steam as of late. Their debut on Boston, MA’s Run for Cover records, Cardinal, has received universal acclaim, solidifying what their fans likely felt from that inaugural listen, or after that first witnessing of the band live: that they would outdo themselves from album to album. Technically, Cardinal is only the band’s sophomore LP, so it’s a little too early to tell just how deep the creative well goes. Info on the band is rather scarce, but one source points to a recent relocation to Brooklyn, while the origins of the band stem back to frontman Evan Stephens Hall’s college days, where he met bandmate Nandi Plunkett.

For now, the way things are unfolding for Hall and the current Pinegrove lineup, we’re likely to get more higher profile releases from them. In six years Pinegrove have taken slow, steady steps forward in both song writing and album narrative. An album, after all, is a story. The way one presents a story for the reader to absorb and move through is much like the craft of assembling an album for the listener to hear through. And though they’re still gaining momentum, Pinegrove have managed to tell quite the story already.

To sum up the sound of Pinegrove is to sell the band short with adjective-heavy buzz words. Sure, Pinegrove sound a little bit emo, a little bit alt-country, a little bit indie rock, but their rather bookish yet anthemic approach to song writing seems to butt heads with these types of blanket descriptors. Meridian, Pinegrove’s debut LP immediately brings to mind Band of Horses’ debut, Everything All the Time. The big difference between the bands are their songwriting approach, Pinegrove often opting for the more nuanced route, with nothing in their repertoire quite reaching the arena-pleasing energy of “Funeral.”

Though they aren’t arena jams, Meridian’s songs do peak-and-valley to completion in a unique way. Verse/chorus structure doesn’t seem all too important to Hall, taking songs through a winding journey of everyday observation and food-for-thought philosophy. Common themes are one thing but to track a Pinegrove song by its lyrics is to float through Hall’s conscious and subconscious mind, like trying to document a waking dream. Take “Morningtime” for example, where Hall poses the rhetorical question of “What if I went down to the pinegrove / and didn’t find anything?” This statement on the search for meaning is followed by Hall’s account of “trying to capture both ends of the splinter / the visible part between the finger nail / and the part still in my finger.” It’s a small glimpse into the types of images Meridian imparts—but doesn’t force—on the listener, which also include awkward breakfast conversation, ladybugs, ocelots and, of course, meridians.

Unless it sees the light of a reissue, Meridian will likely sit among the lot of good albums from unknown bands that will never get the audience they deserve. The good news is, if this current lineup is the one that sticks then we’ll probably get that reissue, and also a followup to this year’s excellent Cardinal. 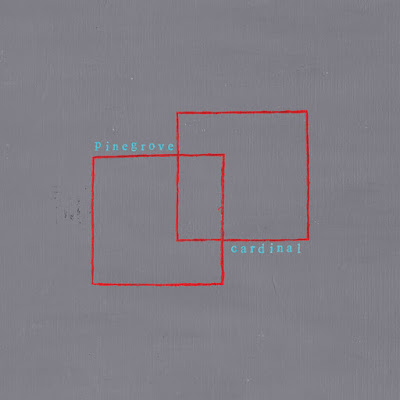 Four years after Meridian, Cardinal feels like a significant step forward. “Size of the Moon” and “New Friends” reappear here but sound more significant in their rerecorded forms. Cardinal‘s opening trio of songs, “Old Friends”,”Cadmium” and “Then Again” bring an as-of-yet unseen energy from the band. The album’s production is cleaner, the songs louder, and Hall’s voice significantly more confident. Opener “Old Friends” begins almost mid-phrase with Hall singing “walking outside labyrinthine over / cracks along under the trees / I know this town grounded in a compass / cardinal landing in the dogwood.” Fifteen seconds in and we’re already given, not just the album’s title reference, but a sense of its overall shape.

Hall strikes me as a small town kind of guy who doesn’t travel much, and in fact he reveals in “Then Again” that when he tried traveling once he “lost his key.” Hall’s hometowness is endearing, and reflects in his profound and personal song writing. “Cadmium” unfolds like a poem in long form, the band summoning a sound that places them anywhere between the midwest and the east coast, but with a subtle yet distinctive southern twang. As “Cadmium” builds Hall’s voice grows more urgent. Percussion is slowly layered into the mix before the whole band erupts on Hall’s proclamation: “If I just say what it is / it tends to sublimate away.” You could read this a few ways but I’d bet Hall is an introvert who’s likely had to learn the hard way of the adverse effects of “bottling” it in.

Though the album is more energetic, it’s not without its melancholic moments. Arguably, Pinegrove is better when served barren. 2013’s & EP was perhaps the perfect synthesis of the slower side of Pinegrove,  and “Waveform” is the closest thing to that lonerism on Cardinal, particularly that one line about an avocado that’s absolutely heart-wrenching—sometimes it’s not what you say it’s how you say it. “Size of the Moon” has been dressed up a bit for it’s rerelease here, but has retained it’s intimacy, thankfully.

In an age where communication is becoming increasingly terse, and songwriting increasingly lazy, musicians could afford to take a lesson from Hall and his band. The reason Cardinal works is not because of its production value, its distillation of musical influences, or even its musicianship for that matter, but because of where it comes from. At no point does the album try to be bigger than itself. It’s a modest affair, simple, and from the heart. It’s refreshing to think that there are artists out there this talented that would still likely rather hang-out and drink with their friends than brainstorm their next publicity stunt on twitter. I’ll gladly eat my own tongue if Pinegrove doesn’t fall into that category.