It’s fitting that 14 years after the release of The Golden Boat, Keith Berry’s debut for Trente Oiseaux, that he should find a home for his new album on the Brooklyn based Invisible Birds label. After all, it was those auspicious releases from the likes of Fransisco López, Bernhard Günter, Steve Roden, Richard Chartier, and Berry himself, that in part inspired Matthew Swiezynski to dream up Invisible Birds in the first place. The scope of Swiezynski’s label has been anything but strictly defined, birthed from the notions of transcendence, memory and nothingness, and how they might link – romantically or otherwise – to landscape and birdsong. These notions, presented cryptically on the Introduction section of the label’s website, are but a glimpse into the complicated workings of a mind that, above all, seems unflinchingly dedicated to the boundless possibilities of art. 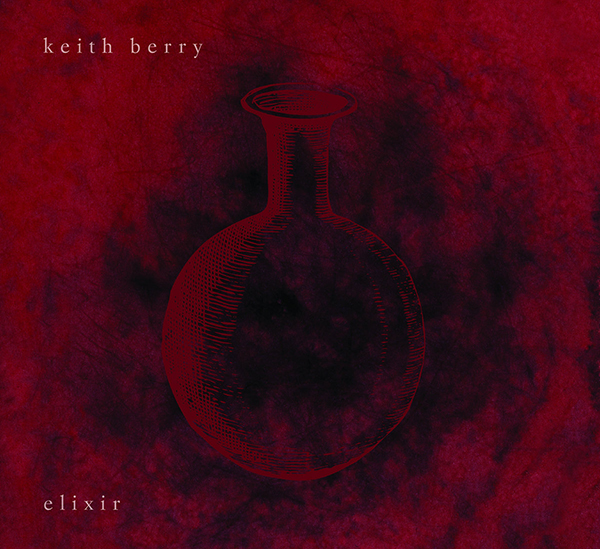 Invisible Birds is in no hurry to shed it’s more romantic ideals, particularly the one that finds endless allure within the mysteries of the human psyche. In this regard, Elixir is another unearthed cave for which the listener can explore. The last I heard from Berry was his limited run picture disc from 2008, The Cartesian Plane. While that album’s finely-tuned drone work swayed toward the emotionally ambiguous, Elixir sees Berry take more risks with mood, opening his sound up to a wider spectrum of feeling. It’s not necessarily happiness that these track’s instill, more like an elevated calm, a contentedness. It’s not the feeling of watching the sunset, but the one where the sun has long set and you just can’t seem to divert your attention away from the slowly darkening sky just above the horizon.

I cannot help but draw comparisons here to the work of GAS, Wolfgang Voigt’s now legendary ambient / minimal techno project from the late 90’s. Voigt will be releasing a new GAS album this year – the first in 17 years – so his music has inevitably worked it’s way back into my listening regime. On Elixir, Berry’s drones are as airy as voigt’s, but he seems perfectly content in foregoing any musical element that one would typically associate with rhythm. I’m reminded, too, of Tim Hecker’s earlier releases for Alien8, back when his music was a lot simpler and before he became hooked on the use of compression algorithms to beef up his sound. On that note, Berry’s music is certainly about doing more with less, where even a small misstep in any given piece might’ve changed the mood to something less desired.

Attached to the release of Elixir is a paragraph by Berry regarding his process in making the album. The parts that struck me were his mention of “a heavily granular processed sound” and his explorations of the “permutations that digital editing software allows.” Perhaps these statements would be of no surprise to someone with a lot more software experience than myself, but to me, they seem in almost direct contradiction to how effortlessly this music flows, how organically the elements seem to come together. Sure, this is electronic music, and I get the difference between a computer making music and using a computer to make music, but this particular music sounds as natural as the flow of water over a creek bed.

Much like Voigt, who claimed that his intention behind GAS was to “bring the forest to the disco, or vice-versa,” one gets a similar sense of amalgamated intent behind Berry’s work. However, Berry’s intentions have never felt as cut-and-dried, and unlike Voigt, he’s been lurking more or less in the shadows for 15 years, emerging every so often with an album that shines like a beacon among the year’s long list of drone releases. When 2017 eventually rolls to a close, you can bet that Elixir, too, will stand out among the lot.