Matthew Cooper is the name behind Eluvium, and if his 15 year tenure with Temporary Residence has proven anything, it’s that his modernized take on classical and ambient music has been anything but one-dimensional. Eluvium recordings generally favour a relaxed piano – see the piece “Don’t Get Any Closer” as a choice example – but for my money, the real magic happens when Cooper limits himself to little more than a guitar. Where the majority of his albums fall somewhere between chamber music and ambient lonerism, Talk Amongst the Trees is to date Cooper’s most restrained and true-to-form drone work. The beginning of 2017 marked a remastering and reissue of the album, its first ever vinyl pressing since its CD only release in 2005. I must say, as a milestone to kick off the year, Temporary Residence certainly nailed it. 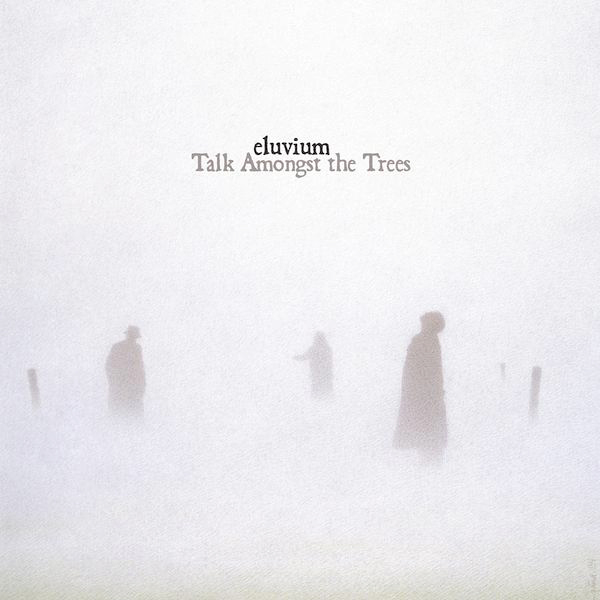 As far as how it sounds, Talk Amongst the Trees is not hard to grasp. Each piece revolves around a unique guitar pattern, usually either a series of elongated tones or a few strummed chords, which is then looped and slightly tweaked as the track progresses. Whether you’re listening to the album for the first time or the ninetieth time, some tracks remain cinematic, uplifting, while others feel more neutral, while others still take the listener to a place of somber reflection. On the surface, there is nothing cryptic about this music, nothing lurking beneath a veil of noise, just simple, guitar sourced ambient music with nothing to hide. It wouldn’t surprise me then if some Eluvium fans wrote this one off a little too early, pinning it as overly simplistic. I believe the contrary to be true, and after years of listening to this record, I still marvel at it’s ability to keep my attention despite its straightforwardness.

How Cooper weaves minute sonic changes into these pieces is a big part of why they avoid stagnancy. These changes, that happen slowly over time, give the album a subtle sense of propulsion, but where these songs end up is never all that far from where they begin. The album’s sprawling and masterfully crafted centrepiece, “Taken,” is the most overt example, where no more than four chords are strummed on a guitar and set to loop for nearly 17 minutes. Within that time many things happen, but it’s hard to ever pin point exactly what they are. The piece gains momentum and plenty of texture is woven into the mix, but after awhile it’s as though the foundation of the music starts slipping away, the various elements pulling apart from instability. As if recounting the history of a star, “Taken” rises, peaks, implodes, and eventually dwarfs, and the effect is mesmerizing.

Nothing else on Talk Amongst the Trees quite reaches the grandeur of “Taken,” but that hardly reduces the album’s potency. “Everything to Come” pulsates with high register tones that rise and fall in an effortless dance that makes one easily forget that they’re listening to a loop. The 10+ minute opener, “New Animals From the Air,” with its hypnotic backwards guitar and enveloping bass, sounds all the more captivating in its remastered form, where the original’s distracting peak distortion is removed. Like an endless warm blanket, a pillowy cloud, or an opiate fog that the cover alludes to, Talk Amongst the Trees is an album to lie back and get lost in. And although Cooper foregoes the rigour of old school minimalism, along with the compositional structure of acts like Stars of the Lid, he’s certainly extracted a unique take on the inexhaustible drone. Here’s to celebrating this reissue and to hoping for Eluvium’s overdue return to the metaphysical guitar.