Scare me not, scare me not. One can almost hear Audrius Simkunas, aka Sala, muttering these words to himself like a reassuring mantra, standing alone in the depths of a great, mysterious forest. Memory plays a predominant role in Unfathomless releases, but few seem to encapsulate childhood fear as well as Scare Me Not. It is not that the recordings here are especially sinister, or creepy, but that there is a looming mysteriousness about them, as if, at any moment the boogey man might rear his ugly head. I’d argue that Simkunas isn’t saying we should all face our fears already, but that maybe fear is an important part of our memory, that it plays some pivotal role in human development. In any regard, Scare Me Not provides ample space to mull it over. 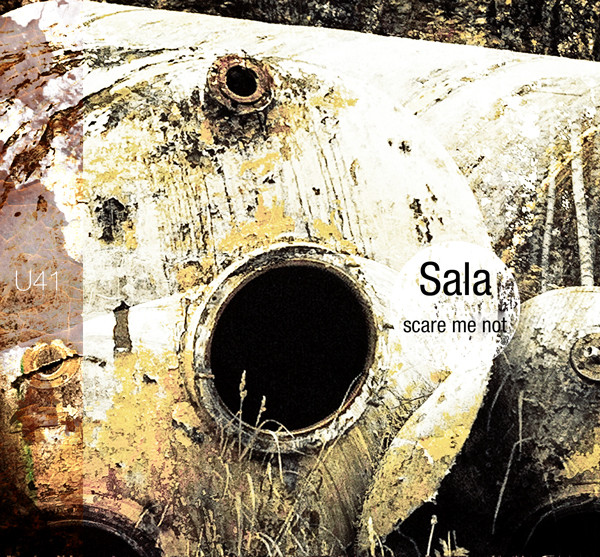 From the number of albums I’ve heard that come from Lithuania, the place seems brimming with abandoned war era locations. Inspiring for field recordists, these sites beckon their reawakening through sound, and it was one of these locations where Simkunas found his inspiration for Scare Me Not. Using the cavernous space of bygone, rusty objects as his base note, Simkunas reigns in sounds from his surrounding environment. Bird song is the first thing that is heard, appropriately enough, as birds are the true commencers of the day. The remaining environment is introduced very slowly, a short, bellowing drone here, the soft shuffling of human activity there.

Things pick up around the 15 minute mark, where three or four different sound sources coalesce into a soupy alien soundscape. It’s hard to say how Simkunas achieved a lot of these sounds, perhaps with some specialized sensitive sound equipment. He seems to allude to something of the nature on his description of the work, referencing “esoteric surgical instruments of sonar knowledge extracting,” whatever that means. Later on, around 19 minutes in, there is a pleasing, higher register tone that undulates in the background, acting as a nice counter to the more tactile elements. Reminds me a bit of Ora.

Unfortunately, Scare Me Not peaks a little early, and I’m not entirely convinced that it warrants it’s 65 minute run-time. The 20 minute second part meditates a little too heavily on a drone that sounds like someone leaned a guitar against an amp and walked away. However, there is more going on to the piece then that one uninspired drone, and Simkunas is smart enough to have more than a single element at play at any given time, keeping things interesting. I can’t imagine returning to this work too often, but it is an interesting album nonetheless, if not at least for the unique sounds and feelings it conjures up.