I can’t help but view the title of Olivia Block’s late 2016 release for Glistening Examples, Dissolution, with at least a glint of irony. In a light, Block’s album feels more like a Solution: the other side of a complex equation rife with fragmentary voices, the result of which could have been strung together in one of a million ways. Akin to the diaphanous reconstitutions of shortwave radio and distressed electrical signals deployed by Jim Haynes, Dissolution sees shreds of arcane sound Frankensteined together in a most satisfying and unpredictable manner. The album, being a reflection upon human ‘webs of significance,’ reveals Block as an artist cognizant of the perils of over contextualization. Thus, the themes in which Dissolution are framed exist merely as a container for the music’s free roaming. 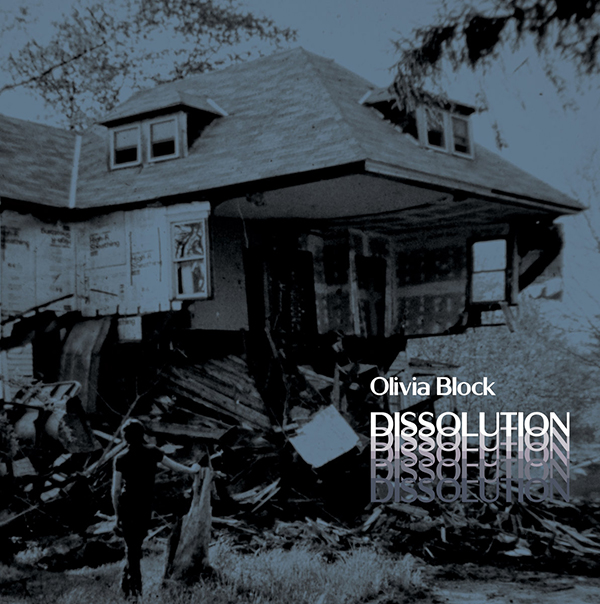 “Free roaming” is not to say that Block was somehow able to phone this one in, but that the music’s progression comes across as natural, despite its scrupulous cut-and-paste formation. The way Block works lends her albums the quality of a photographic mosaic in reverse: the smaller fragments are easy to see, while the big picture takes a lot more time to grasp. This may seem obvious, but there is plenty of similarly minded work out there that either just coasts unimaginatively or billboards an obvious trajectory. Dissolution is the flip side of that coin, its parameters expanding and retracting to suit the artist’s idiosyncratic vision.

To bring that vision to life Block gleaned from sources that included field recordings, found and personal microcassette tapes, shortwave, and NIST time recordings. In what I can only assume was an attempt to make something out of nothing, she also used snippets from municipal audio feeds from several US cities—and we all know how dry those can be. On Dissolution, these voices haunt the work, and are fused into the composition as a scattering of non-linear phrasing. Sometimes we get as little as a morpheme or phoneme, but these fractions—as minute as they are—carry an emotional weight when juxtaposed next to the other elements. A flute and clarinet also grace this work, but if it weren’t written on the packaging one would be hard-pressed to pick these out (the dronier stretch that closes out “Dissolution A” I think).

Despite how dense her music can get, Block’s approach is that of a minimalist. It’s “Dissolution B” that reveals this a bit more, as she ever so slightly turns down the intensity and guides the work into more of a steady-state expansiveness. Dissolution also includes a third, digital only, track entitled “May 31, 2016.” The track is a live alternate mix of “Dissolution B,” which, was the piece she sourced for a number of immersive performances. Also want to point out that the limited edition LP comes with 35mm slides embedded in the vinyl (see below). Very cool, but sadly, limited and currently sold out. An excellent release all around, check out the Glistening Examples bandcamp here. 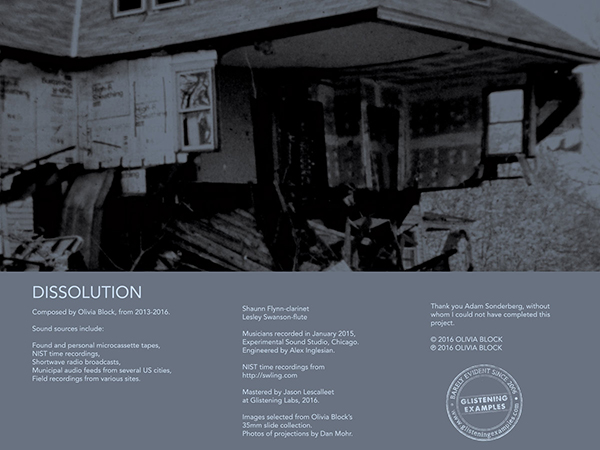 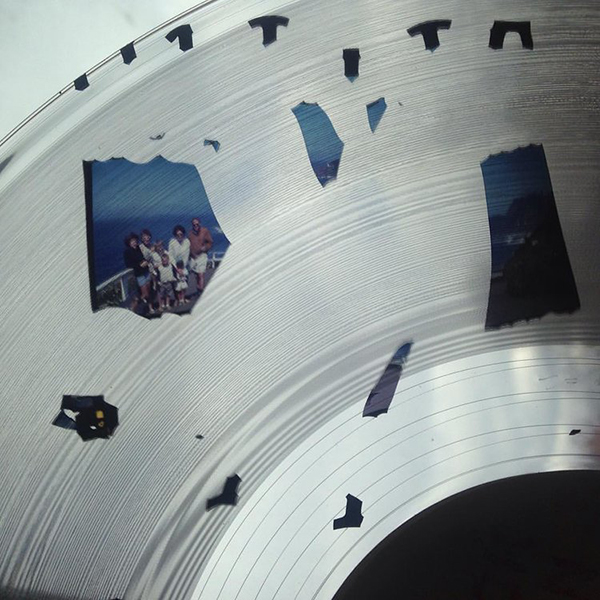